St. Mary’s – A Common Rosefinch flew over Longstone towards Sandy Lane, the Yellow-browed Warbler was still at Lower Broome Platform on the Garrison and the Melodious Warbler was still in gardens below the Sallyport walls. The Black-necked Grebe was still in Porthcressa Bay, 2 Black-tailed Godwits were on Porth Hellick Pool and nearby a Firecrest was on Porth Hellick Loop. A Dotterel & 2 Golden Plovers were on the Airfield and 2 Whinchats were at Old Town with another at Salakee Farm and a fourth in Lower Moors.

St. Agnes – The 2 Red-eyed Vireos were still in the Parsonage Garden and the Lesser Yellowlegs was still on the Big Pool. 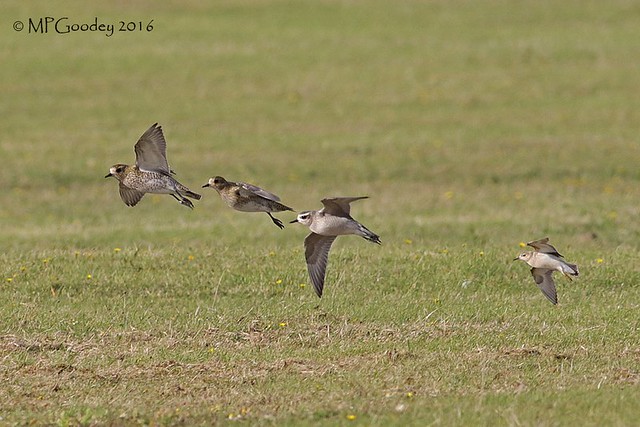 St. Mary’s – An American Golden Plover and a Buff-breasted Sandpiper were with 3 Eurasian Golden Plovers on the Airfield. A Dotterel was on Peninnis, the Black-necked Grebe was still in Porthcressa Bay and the Melodious Warbler was still in gardens on Sallyport. Single Black-tailed Godwits were at Lower Moors & Porth Hellick, a Common Scoter was off Porth Minnick and a Kingfisher was in Lower Moors. 2 Whinchats were in the Standing Stones Field, Lower Moors and another was at Tolman Point.

St. Agnes – 1 Red-eyed Vireo was still in the Parsonage and the Lesser Yellowlegs was still on the Big Pool.

Tresco – A Yellow-browed Warbler, a Common Scoter, a Common Redstart and a Pied Flycatcher.

Inter-island waters – An Arctic Skua was in the Roads.

St. Mary’s – The American Golden Plover & the Buff Breasted Sandpiper were still on the airfield, the Black-necked Grebe & the Pale-bellied Brent Goose Were still at Porthcressa and the Melodious Warbler was still in gardens along Sallyport. The Western Bonelli’s Warbler, last seen on Sunday 25th, was relocated in exactly the same pines at Helvear.

St. Agnes – A Red-eyed Vireo was at Covean, and it or another was seen briefly in the Parsonage.

Tresco – A Great Spotted Woodpecker and a Whinchat.

Inter-island waters – An Arctic Skua was in the Roads.

At sea – A Balearic Shearwater, a Grey Phalarope and a Sabine’s Gull were seen from the Scillonian III crossing from Penzance to St. Mary’s. Birds seen on the daytime pelagic trip were; 5 Sooty Shearwaters, 50+Grey Phalaropes, a Long-tailed Skua, 3 Great Skuas, an Arctic Tern and 2 Puffins. 30 Common Dolphins were also seen