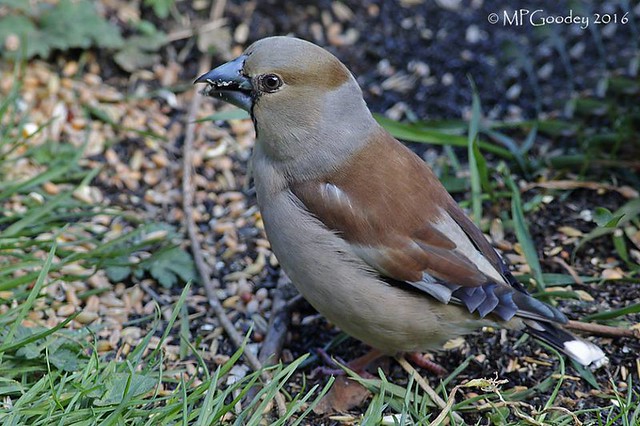 St. Mary’s – The male Montagu’s Harrier was seen at Pelistry, Normandy and Porth Hellick. Also at Porth Hellick were a Lesser Whitethroat a Cuckoo, 3 Whimbrels, a Common Sandpiper and a male Marsh Harrier which was later seen over Lower Moors. A Ring Ouzel was on Porth Hellick Down, a Black Redstart was at Giant’s Castle, a Grasshopper Warbler was at Carn Leh, Old Town Bay and 4 Golden Plovers were on Peninnis. The Hawfinch was still visiting a garden in Holy Vale.

St. Mary’s – The female Hawfinch was still paying occasional visits to a garden in Holy Vale. 3 Whimbrels, the male Montagu’s Harrier, a Cuckoo and a Common Whitethroat were seen at Porth Hellick. An Iceland Gull was on the Golf course and a Merlin was at the airfield.

Tresco – The Snowy Owl was again on Castle Down before flying off towards Bryher. The Iberian Chiffchaff was still singing near Tresco Abbey opposite Well Cover and a Greylag Goose was seen in Tresco Channel.

Bryher – The Snowy Owl was on Shipmanhead Down in the afternoon and a Common Whitethroat was on the island.

St. Mary’s – The female Hawfinch was still visiting a garden in Holy Vale, the Montagu’s Harrier was at Green Farm and a Marsh Harrier & a Lesser Whitethroat were at Porth Hellick. A Ring Ouzel was on Porth Hellick Down, a Common Swift flew over Kittydown and a Cuckoo was in Lower Moors.