Published by Alan Hannington on September 23, 2015 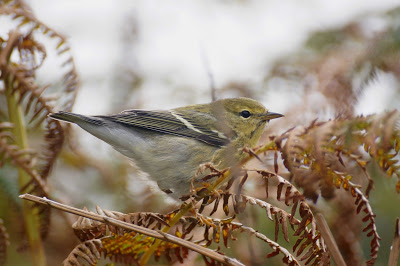 St. Agnes – A BLACKPOLL WARBLER was found in the morning at St. Warna’s Cove and a local birder looking for it in the afternoon found a GREY-CHEEKED THRUSH in the same place! Also seen on the island were 3 Spotted Flycatchers, a Whinchat, a Wryneck, a Garden Warbler, a Whitethroat, a Firecrest and a Yellow-browed Warbler.

Tresco – The Glossy Ibis was on Simpson’s Field, the American Golden Plover was on Bounty Ledge near Green Island. Also on the island were a Tree Pipit and a Mediterranean Gull.

St. Mary’s – The 3 juvenile Pectoral Sandpipers were still at Porth Hellick, the Dotterel was still on the Airfield, a Whinchat, a Pied Flycatcher & a Yellow-browed Warbler were at Longstone, 2 Firecrests were in Old Town Churchyard, another was on King Edward’s Road, Peninnis and one was at Higher Moors.

Eastern Isles – A Purple Sandpiper was on Hanjague