Published by Alan Hannington on September 20, 2015 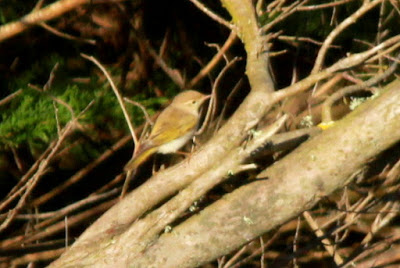 St. Mary’s – A Western Bonelli’s Warbler was found early morning on the Upper Broome, Garrison. Early in the evening birders returning for another look found a second Bonelli’s Warbler which was more than likely another Western Bonelli’s Warbler but as it was not heard to call Eastern could not be ruled out. Just around the corner was a Yellow-browed Warbler. The 3 Pectoral Sandpipers were still at Porth Hellick Pool, a Common Redstart was at Deep Point and 11 Whinchats & the autumn’s first Jack Snipe were at Content. 3 Whinchats, a Tree Pipit, a Common Redstart & 23 Siskins were at Trewince and 2 Yellow Wagtails, a Lesser Whitethroat & a Firecrest were at Longstone.

St. Agnes – A Wryneck, a Yellow Wagtail and 3 Firecrests.