3 Crossbill flew over the pines at Spray View, near Deep Point & 1 was at Longstone, a Hobby was over Trenoweth and the Yellow-legged Gull flew over Bay View Terrace towards Porthloo

7 Crossbill flew over Longstone, 3 Swift were over Longstone with another over High Lanes and the Yellow-legged Gull was at Porthloo.

The Yellow-legged Gull was on a warehouse roof t Porth Mellon Industrial Estate and a Hobby was over the Garrison.

An “Acro” at Pendrathen bulb dump was initially thought to be a Blyth’s Reed Warbler bur was subsequently re-identified as a Marsh Warbler.

The Yellow-legged Gull was at Porthloo, a Hobby was over Maypole and a Cuckoo was on Peninnis.

3 Crossbill were in the pines at Pendrathen bulb dump, 2 were in the Porth Hellick Down pines and 1 flew over the Garrison Pines.

The Yellow-legged Gull was seen at Porthloo and later at Porthcressa. 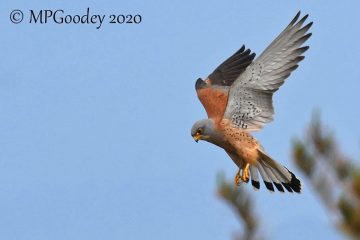